Lexy
Hi. I had never been a staffy fan and was actually one of those ignorant media listeners relating to this type of dog. After being told by Eric that they are the most amazing dogs I caved in and we got wee Lexy in July from SSR. We only had her for 7 or 8 weeks as unfortunately she had a tumour but she completely stole my heart, she was meant to be with me for that short time to make me believe that staffys are actually amazing, soft, loving, cuddly, fun loving dogs and it broke my heart when we had to make that decision to let her go to rainbow bridge. The house felt empty so we got wee (ebony) now Indy in October she is a complete rogue, a chewer, full of nonsense,  won't walk unless she knows her ball is out too and chases it for hours on end. Wouldn't change her she is such a wee character and loves to cosy in and loves getting cuddles. Love when I come in from work and she is so excited to see me. I am now staffy mad they are amazing dogs x
Theresa Trotter 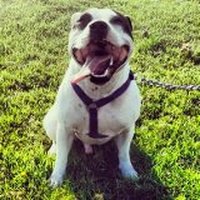 COSTA
I'm ashamed to admit that I was once one of those people who assumed rescue dogs were "someone else's trouble" but boy was I wrong!!  We'd had 2 Staffies for 9 years when we suddenly lost our beautiful girl in Oct 2012, we decided we couldn't leave our boy on his own after having a companion for so long so we got a Staffie puppy for him but we sadly lost our boy just a short 8 months after our girl, it broke out hearts again & we vowed there would be no more & that our wee puppy would be fine on her own but seeing how excited she'd get with dogs in the park & family dogs we thought a companion would be good for her as she did miss our boy's company.  I came across SSR at a dog event & joined the Facebook page & one day I seen this poor, baldy wee Staffie come up on my newsfeed, I showed him to my Hubby & he said straight away to get in contact to enquire about him.  I filled in a form then received a phonecall from Karen who explained Costa's background to me....he was saved from the pts list & was suffering from Demodex which would require quite a bit of treatment before we could bring him home but in the meantime we took our puppy, Stella to meet him & they got on great so the deal was sealed.  We were desperate to bring Costa home so it was agreed a number of weeks later that we could collect him from foster & carry on treatment at our Vets which we did.  It was a bit of a rocky start once we got home with fights over toys, ect but with time, training & patience we got there.  Costa received treatment in the way of special baths at the Vet weekly for 8 weeks for his Demodex, my hubby & I both took allergic reactions to the Aludex which Costa was bathed in but that was just a temporary hurdle & so worth the results at the end of the 8 week treatment.  It was so rewarding to see the transformation from the wee ugly duckling to the strapping handsome chap he is now.  Costa is such an amazing boy after all he's been through for a young dog, a cheeky chappy at times but so very loving & best of pals with our other Staffie, Stella.  I'd highly recommend adopting over buying now, I'm so glad we got the opportunity to step up & help Costa.  He is just a wee star, everyone loves him.  The only downside is him hogging the bed & the snoring hahaha!!  Adopt, don't shop.
Claire McLaughlan 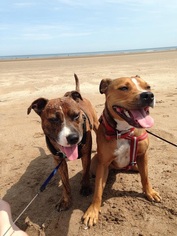 I have grown up with Staffies all my life and when I left home I was without a dog for the first time in 20 years. So after 8 months of being dogless I got in contact with a rescue down south and got my first staffy all by my grown up self! We had her for around a year when she went through some bad experiences with another dog and she became very nervous. When I found out about SSR who are very local to me I got in touch about fostering and that's when Ronald (formerly Czeski) came into our lives. At first, my bitch was afraid of him but after a week he had changed her confidence so much she was back to her old self!
I couldn't believe it! So I took the very easy plunge and adopted Ronald after 2 months of fostering. The two are best of friends. I have managed to change a lot of people's opinions about staffies with my two; people who only listened to media who were frightened of my dogs (my own boyfriend for example). Then my two make them realise that staffies are loyal, soft and FULL of kisses and love!
​ Thanks SSR!  Georgia

My husband and I messaged SSR to enquire about getting a cat friendly dog to join our family in dec 2013. We got a response to say they weren't rehoming over Xmas but would give us a call in January. Unfortunately we lost our cat on Xmas day, so when we got the call we explained it didn't have to be a cat friendly dog after all. We were told of a boy called Claude, who sounded perfect. And he is. He had my heart the second I saw him. He's got the softest nature and most handsome face.
Nearly a year later we decided it was time for Claude to get a sibling from SSR, and so came Edna. We've not had her long, and she's a poor wee soul, baldy with Demodex. We have started treatment and can't wait to see the results. Claude loves his wee sister and I can't wait to watch her grow up with him. I can't thank SSR enough for saving my pups and helping us find them. Can't imagine life without them.
Keighley & Dave Thomson 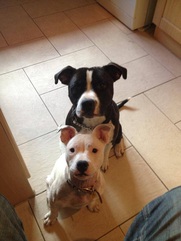 ECHO
We got our first staffie in may 2012 and almost straight away we knew we had to have another. After having a look at different rescues we contacted SSR about adopting one of their dogs. This is how Echo came into our life's. When we went to see her she was a tiny 15 week old pup who was totally bald from mange and also completely deaf. How could you not feel sorry for her? We've had Echo for nearly two years now and wouldn't trade her for anything. Don't get me wrong she was certainly a challenge to begin with. She destroyed two couches, numerous phones, tv controls and also ate a hole in one of the walls but in life you get back what you put in and training Echo and seeing the life she now leads has been a very rewarding experience.  She is definitely a feisty wee thing and keeps us on our toes but she is also so loving, clever, sweet, loyal, cute, silly. I really could go on forever. The co-ordinators at SSR we such a great help in the beginning when things we tough they we very supportive and always offered advice and help. I would not only encourage people to seriously consider a rescue staffie, they are such wonderful loving dogs, but also don't be scared about a taking on a deaf dog. They are the exact same as any other dog, they are trained in the same way and can live the same life. Echo is a firm part of our family. Thanks SSR
Jade, Michael and Chopper
Hi,
Just a wee story of how Jimbo became part of our family.
In April this year our much loved Nico sadly passed away.
He was a staffie cross rescue dog from sspca Inverness and had been with us for seven years.
To say it was heartbreaking is an understatement,we decided in haste not to have another dog and all his stuff was put in the loft.
We soon realised a huge void had been left and missed all the things dogs fill our lives with,so began the search of rescue centre's.SSR then came to our rescue with a phone call to say a dog named Jimbo is looking for his forever home.On Sunday the 01st of June we traveled to Braemar to meet him,all worries gone,he is the dog for us,our forever dog,been with us six months now and loved just as much as nico ever was.PS Jimbo says thanks to his fosterer for choosing his new family.

And a big thanks from us to SSR,keep up the good work it's well worth it.
Rob,Donna and Robert. 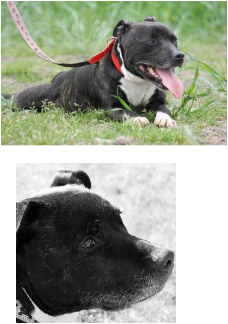 On the 18th of February 2014 I lost my first staffie tyson when he was 14.5 yrs. He came from an unwanted home and over 12 yrs became the apple of my eye. In his latter years he suffered ill health and through Parkside vets was able to live his last years in as best comfort as I could provide. The staff there are brilliant and supported me through all my tears. Here I met Fiona who helped me find a new pooch 5 weeks later!
Woody settled in on the first day and I've never looked back. 8 months on and he is my best friend, such a sooky boy. Thank you to smiles for all you do, saving lives. Staffies get such a bad reputation but behind every bad dog is a bad owner. I promote this charity every chance I can.
Claire McCombie 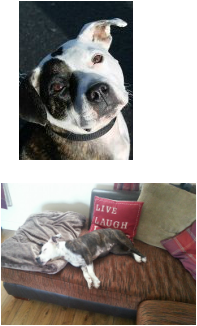 Staffie smiles rescue are just amazing and my family and I will always be in debt to you for giving us the most amazing wee dog kym.
Kym has been with us for just over 6 months and she brightens every day up with her beautiful Staffie smile.
We have had Staffies for 14 years now they are simply the most amazing breed ever. Kyms profile fitted our family perfectly on paper and when we met her for the first time it was love at first sight.
My little girl kym is my best friend and Is such a calm confident dog in all situations. Thank you Staffie smiles xxx
Louise Lessels