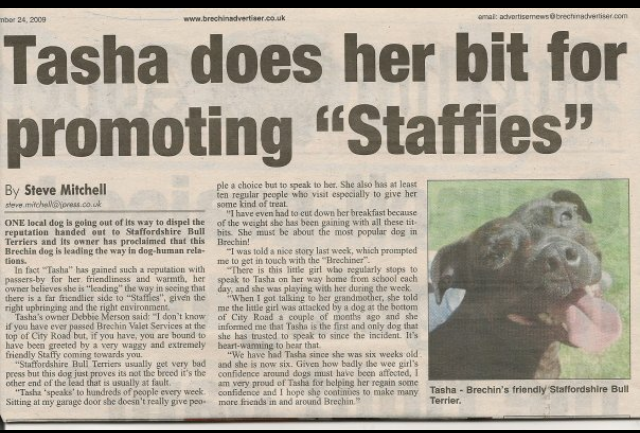 Staffordshire bull terrier saves teenage girl in an attack in a secluded woodland. 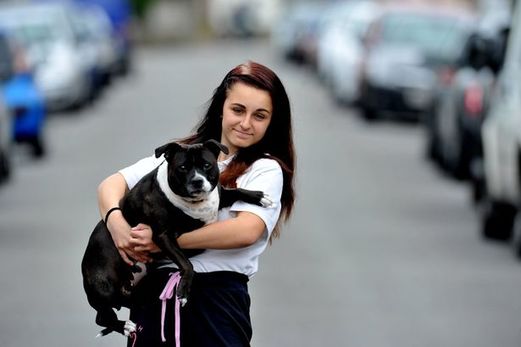 A schoolgirl was saved by her pet dog when she was attacked by a man on a secluded woodland path.

Megan Jones, 13, was taking Staffordshire bull terrier Midi for a walk when she was suddenly set upon by a stranger who battered her over the head with a stick.

But Midi then came to her rescue, biting the man on the leg and dragging him to the ground, giving Megan the chance to escape.

She managed to run away, then hid behind a bush until the man had gone and Midi found her.

Megan said: “It was very frightening but Midi was fantastic. She is my hero.”

Mum Claire said: “If the dog hadn’t done what she did we could now be dealing with something much worse.

“If Midi hadn’t defended Megan she may not have been able to get away. What scares me is the motives of this man. It makes me feel sick.”

Megan was not seriously hurt but has been left so ­traumatised that she is afraid to leave her home in Bargoed, near Caerphilly, South Wales.

Claire added: “Megan is usually such an outgoing person but after this happened she hasn’t wanted to go to school or go out with her friends.”

Following the attack, in Ystrad Mynach, police are looking for a man in his 30s, 5ft 10in, of slim build, with brown hair with a long fringe over a side of his face.
​​

Kym,  from death row to  star

​November 9, 2015 12:07am
AAP and staff writersThe Daily Telegraph
​AN elderly man’s English Staffy has proved to be a true best friend, leading rescuers through dense bushland in the NSW Blue Mountains to find his missing owner.
Manfred Classen, 84 from Colo, went for a walk on Wednesday but became disorientated. His wife, however, suffers from dementia and no alarm was raised.
On Thursday his son Lovell realised his father was missing and the rescue effort was launched.

Police and volunteers from Hawkesbury, the Blue Mountains Rescue Squad and PolAir narrowed the search area to within a kilometre of the man’s home thanks to the squeals of his dog Kiara.
The dog, which the family adopted from a pound a year ago, weaved between two mountains, creeks and a ravine, eventually leading Lovell to his father’s location on Saturday morning.
Lovell told Nine News his father was half way up a ledge and clinging to a tree when they found him..

I just hugged him and I couldn’t believe it,” Lovell said.
“He’s definitely smashed his nose on something and had blood all over his face and scratches all over his body. He was barefoot in a t-shirt.
Lovell said Kiara loved his father.
“My dad has had the dog now for three to four months and the dog just absolutely loves my father,” he told Nine News.
“She’s been the best dog we’ve ever owned.
“She’s just an amazing animal.”
Mr Klassen was taken to hospital where he is being treated for minor facial injuries, exposure and dehydration.