Sergeant Stubby (1916 or 1917 – March 16, 1926), was the most decorated war dog of World War I and the only dog to be promoted to Sergeant through combat. He was a brindle American Staffie and served with the 102nd Infantry in the trenches in France for 18 months. Stubby participated in four offensives and 17 battles.  Stubby's beginnings were humble, he was a stray who he found himself wandering through an army training session at Yale Field in Connecticut where he befriended a Corporal named Robert Conroy.  Llegend has it that Corporal Conroy was so smitten with Stubby that when it came time to ship out to the Western Front, he smuggled the dog onto the vessel bound for France. Even when he was discovered, he was allowed to remain with Conroy and so found himself on the Western Front in the thick of combat
Stubby survived a number of injuries, including those from shrapnel and gas attacks.  Having survived the gas attacks, Stubby became very sensitive to the smell of gas, and was able to detect gas much earlier than his human comrades and alert them in time. His acute hearing meant that he could hear even the quietest sounds from advancing enemy and Stubby proved excellent at silently alerting his comrades when he could hear the enemy was near. His major triumph was hearing and immobilsing a German spy who had tried to sneak into Conroy's camp one night. He also asserted himself as a 'mercy' dog, scanning the battle fields for injured soldiers and comforting them whilst they lay dying or alerting paramedics to the wounded.

Stubby was made a life member of the American Legion, the Red Cross, and the YMCA. In 1921 the Humane Education Society awarded him a special gold medal for service to his country.
Return to Home page 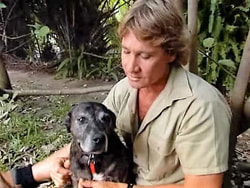 Steve Irwin and Sui (Christmas Day 1988 - 23rd June 2004) .
​Famed conservationist, animal handler, and TV personality Steve Irwin raised his Stafford from a pup and rarely went on an adventure without her by his side. He trained Sui to help him wrangle crocodiles, wild pigs, and snakes and she was seen in many episodes of Irwin’s show The Crocodile Hunter.


Sui was the love of his life and his “loyal friend, protector and wildlife warrior.” Irwin loved Sui enough to name his daughter, Bindi Sue, after her, and Sui and Bindi shared a special bond. “Sui protected Bindi for six years,” wrote Irwin. “It was so funny—no-one was allowed to muck with Bindi whilst Sui was guarding her. Then Bindi would put
bows in her hair and play Barbies with her, we lost count how many times Bindi fell asleep on top of a very, very patient Sui.”

Diagnosed with terminal cancer in 1998, Sui went on to enjoy another 6 years with her family, before finally passing away in the arms of Steve and his best friend Wes, who had shared many adventures with Steve and Sui in the 16 years of her life. 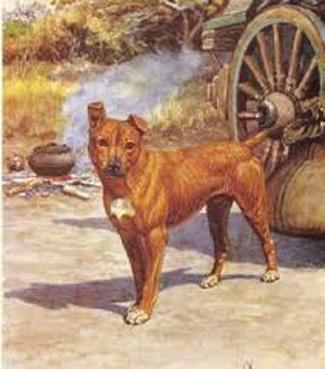 Jock of the Bushveld is a novel by South African author Sir James Percy FitzPatrick, which tells the story of FitzPatrick's travels with his dog, Jock, a Staffordshire Bull Terrier, during the 1880s.  The book chronicles the time when FitzPatrick worked as a storeman, prospector's assistant, journalist and ox-wagon transport-rider in the Bushveldregion of the Transvaal (then the South African Republic).


​Jock was the runt of his litter and due to be drowned before FitzPatrick adopted him.  He was a brave and loyal dog and FitzPatrick told his chidren the stories of their adventures together for many years, until his friend Rudyard Kipling suggest he write a book... the rest, as they say is history!  It's also interesting, looking at the portrait of Jock, to see the differences between the earlier Staffies of the 1880s and the dog we know and love today.

Return to Home page
WATCHMAN
The mascot tradition in the Regiments of Staffordshire stretches back to the 19th Century. In 1882 The South Staffordshire Regiment was ordered to march with Lord Wolseley to the relief of General Gordon who was besieged in Khartoum. They entrained at Cairo with their Staffordshire Bull Terrier “Boxer”. Unfortunately Boxer leapt from the moving train and was seen lying unconscious or dead at the side of the track.
​
A few days later when the Regiment encamped at Assiut awaiting orders for the final phase of their march, a very thin and bedraggled dog staggered into their camp and collapsed. Boxer had walked for over 200 miles along the scorching desert railway track to rejoin his regiment, a true soldier.
From then on the tradition of having a Bull Terrier as a mascot continued with the battalions until after the Second World War. 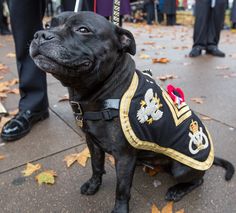 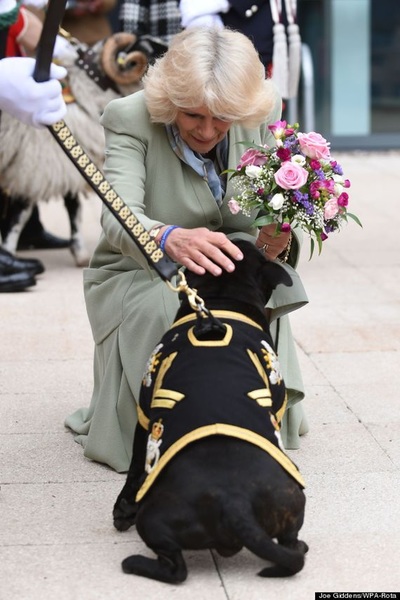 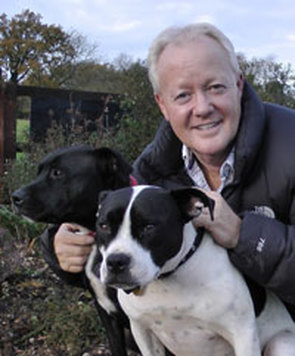 Keith Chegwin
I just love my Staffies – They are such fun loving, kind and generous dogs. They’re bright, active little friends, that get on so well with children and adults alike – as well as other animals.

We’ve had Staffies for over 12 years and would never consider any other breed.

​There is however one grave danger that all Staffie owners must be aware of DO NOT LET THEM ON YOUR BED as very soon they will be in your bed!!!
We (my wife Maria) have Poppy in with us at night and Ted (my son) has Harry.
Sadly, Staffies have been given some bad press but with the right owner they make such wonderful loving pets. They’re well behaved, affectionate and playful. Poppy and Harry are both rescue dogs – we’d never be without a Staffie.
Keith Chegwin
www.keithchegwin.com 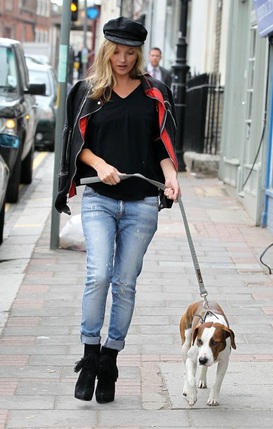 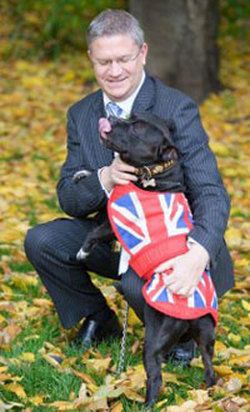 Andrew Rosindell M.P.
​Having owned two Staffordshire Bull Terriers, ‘Spike’ and ‘Buster’, I can say without hesitation, that a human being could not wish to own a better dog than a Staffie!
They are wonderful with people and show true loyalty. They are intelligent and fun to be around. You are never lonely when you have a Staffie, they just love being part of your life and mine have made an enormous difference to mine in a very positive way.
A Staffordshire Bull Terrier also shows the true British Bulldog Spirit and mine have both proudly worn their Union Jack coats on visits with me around my constituency of Romford and at the House of Commons!
Andrew Rosindell M.P.
www.rosindell.com
​
Tom Holland is an English actor/Director and dancer. Holland is known for playing the title role in Billy Elliot , the Musical at the Victoria Palace Theatre, London, as well as for starring in the 2012 film The Impossible and many fans enjoyed his role of playing Spider-Man in the Marvel Cinematic Universe.

Tom has a beautiful staffie called Tessa who he facetimes and reads his scripts to - how cute. 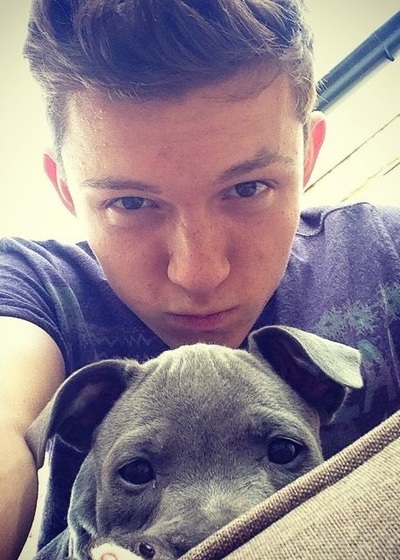 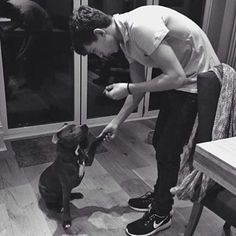 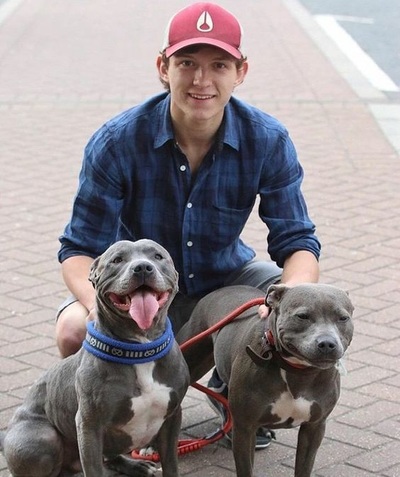 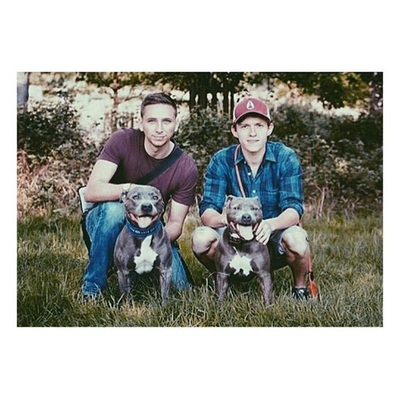 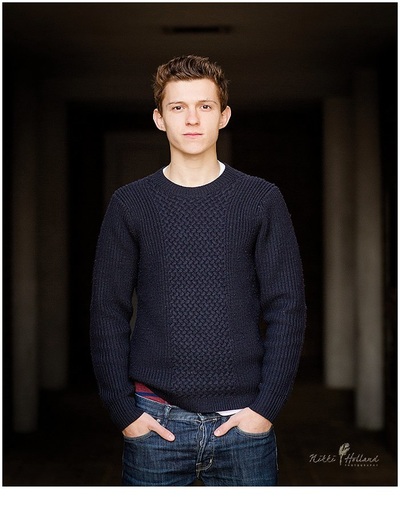 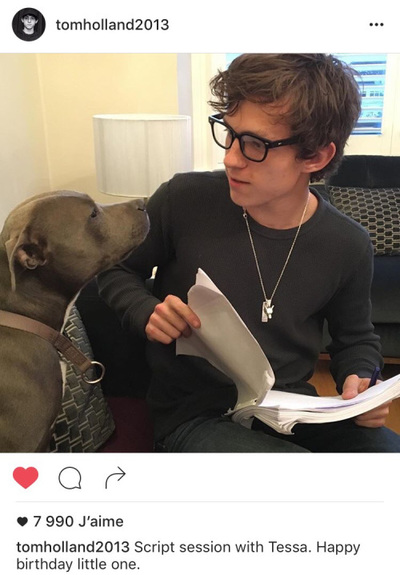 ​*Information taken from other web sources.
Return to Home page