​Staffordshire Bull Terriers have become
an overbred and abused breed in the UK.
Every year, thousands are euthanised
through no fault of their own,
so much so that they have become the UK’s
"Death Row Dogs".

​A dog pound is a facility where the local Council hold stray dogs found in their area, which have been picked up by either Local Authorities or by the Police.

The dog will be kept there for 7 days. After 7 days, the dog will become the responsibility of the kennel. Due to the sheer volume of SBT’s arriving in Local Authority ‘pounds’, compared to other breeds of dog the SBT’s are frequently the
​ones that never get rescued and are left ​in the pounds when the dreaded ‘put to sleep date’ arrives.

Please see - The pound dog story
​According to The Dogs Trust annual Stray Dog Survey(2013-2014) an estimated ﻿110,975 stray dogs﻿ were handled by UK local authority pounds during the 12 month period 1st April 2013 – 31st March 2014. Of these, more than 50% were reunited with their owners, while 7% – 7,058 dogs – were killed. Using this figure and based on the return data, the Dogs Trust estimates that approximately 7,805 were killed in UK pounds in the 12 month period. With an estimated 10,000 more dogs being killed in rescue centres, this total is around 18,000 dogs being killed every year; 49 dogs a day; 346 dogs every week,  2 dogs every hour of every day, all killed simply because they were let down by the people who were supposed to care for and protect them, and there is no safe place for them to go. Every year in the UK almost 110,000 lost or unwanted dogs find themselves in local authority pounds around the country, alone and scared. After a mere seven days any dog unclaimed or successfully rescued is legally allowed to be killed by lethal injection.
​Thousands of healthy dogs are killed in the UK every year.
They died afraid and alone, unclaimed strays, thrown out like unwanted toys.
Britain's throwaway society has gone mad.
One staffie dies every hour in the UK.
Please help us to help them,
be the cure, not the cause, spay, neuter, foster, adopt.
And this is how we began............
fostering, adopting, transporting, fundraising, helping to save lives, anyway we can.
Return to Home page 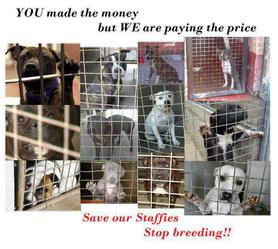 Please take a minute to watch the videos below,
Yes they are sad but they are a true account of
Britain today and it's throw away society,
This is a story that needs to be told
We hope it opens your eyes and touches your hearts like it did ours

"Please, Help us to be their voice"
​The 2014 annual Stray Dogs Survey released by Dogs Trust.

This is happening today in pounds all over the UK.
Help to stop irresponsible breeding by spaying and neutering
your pets and offer a rescue dog a home.
"Be the solution not the cause"

Young healthy animals, outgrown their puppy cuteness,
abandoned waiting to die alone
with no-one to cry for them.

Why save a Staffy ! 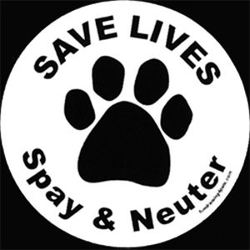 Overpopulation facts are simple.
There are just too many dogs and not enough homes.
Consider these statistics as to how just one litter can result in hundreds to thousands of unwanted dogs:

All this from just one female dog!

Do you still want to breed your dog?

Can you be sure that it's pups and their pups will not end up in the pound
on death row like thousand of other dogs?

Have a look at the dogs we save from death row, a human was
responsible for them once! 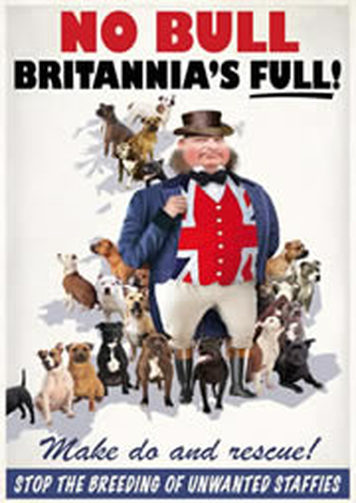 No more lonely cold nights or hearing that I'm bad
No more growling belly from the meals I never had
No more scorching sunshine with a water bowl that's dry
No more complaining neighbours about the noise when I cry
No more hearing 'shut up', 'get down' 'get out of here'
No more feeling disliked only peace is in the air
Euthanasia is a blessing though some still can't see
Why I was ever born, if I weren't meant to be
My last day of living was the best I ever had
Someone held me very close, I could see she was so sad
I kissed the lady's face and she hugged me as she cried
I wagged my tail to thank her, then I closed my eyes and.....
died.

Today is just another day - to me they're all the same
I have the worst of genes you see, I bear the "Staffy" shame.
The shame is in our numbers, there's thousands with no home.
Thousands just like me you'll find, in kennels all alone.

My mum was "just a Staffy", my father - well who knows?
Mum, too, became unwanted, as the last puppy goes.
And then begins the process, of money-making deals
A life of "moving on" unfolds, who cares how the Staffy feels?
If you have the cash to hand, the Staffy pup is yours
But that pup is getting bigger now, just look at those big paws.

You brought me for your image, thought I'd make you look more tough
But you'll find my boisterous nature has already got too much.
If you had thought to train me, with kindness and with praise
You would have had a faithful friend to share your darkest days.
I would lay down my life for you, but you simply cannot see
You make sure you get your money back on what you paid for me.

And on it goes, until one day, I'm no longer worth a dime
The retail on an adult staff - not worth the waste of time.
So what happens to a Staffy now? Do you really want to know?
Do you care what will become of us, when we leave our final home?

Have you ever thought to wonder, "Where is that Staffy now?"
The "Staffy" has another name; he's become a "stray" somehow.
Me, I was put into a car and driven far away
The door held open, I jumped out, I thought to run and play.
It was with joy and happy heart I turned to look for you
You drove away with all my trust and a piece of my heart too.

I wondered round for many days before I was brought here.
Now I wait with heavy heart, trepidation and with fear.
Seven days is all I have you see, seven days for you to claim
The little dog that you threw out, for which you have no shame.

This is my last goodbye now my seven days are up
If only more thought had gone into the future of that pup
As the needle empties to my veins I lay down with one last sigh
I'm sorry I was born a Staffy, because it means that I must die.

This is the end I'm going to die
and then suddenly I understood why
I was bred without a care, without though or reason
Only because my mum came into season

I was bred to be sold, bred for money
At first my new family thought my antics were funny
but as the days past by and the bigger I grew
Left home alone all day I began to chew

My pups were soon sold and I was alone
I really hope they have all found a loving home
Shut up in a cage alone and in the dark
For hours on end, I would just bark

YOU CAN HELP SAVE OTHERS FROM MY FATE
SPAY OR NEUTER YOUR DOG BEFORE IT'S TOO LATE!!! 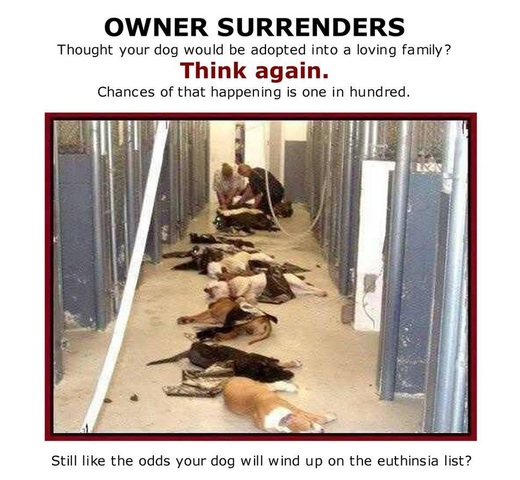 Do I Go Home Today?

My family brought me home cradled in their arms.
They cuddled me and smiled at me and said I was full of charm.
They played with me and laughed with me and showered me with toys.
I sure do love my family, especially the girls and boys.
The children loved to feed me, they gave me special treats.
They even let me sleep with them – all snuggled in the sheets.
I used to go for walks, often several times a day.
They even fought to hold the leash, I’m very proud to say.
These are the things I’ll not forget – a cherished memory.
I now live in the shelter-without my family.
They used to laugh and praise me when I played with that old shoe.
But I didn’t know the difference between the old ones and the new.
The kids and I would grab a rag, for hours we would tug.
So I thought I did the right thing when I chew the bedroom rug.
They said that I was out of control, and would have to live outside.
This I did not understand, although I tried and tried.
The walks stopped, one by one; they said they hadn’t time.
I wish that I could change things, I wish I knew my crime.
My life became so lonely, in the backyard, on a chain.
I barked and barked all day long to keep from going insane.
So they brought me to the shelter but were embarrassed to say why,
They said I caused an allergy, and then they each kissed me goodbye.
If I’d only had some classes, as a little pup.
I wouldn’t have been so hard to handle when I was all grown up.
“You only have one day left.”
I heard the worker say.
Does that mean I have a second chance?
Do I go Home today? 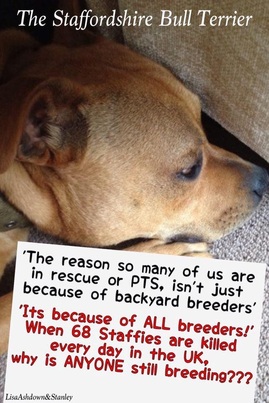 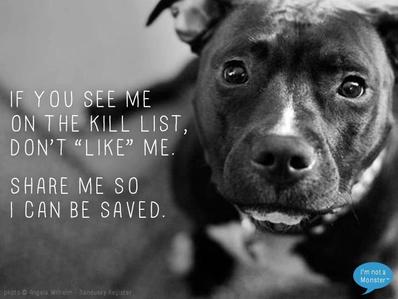 Back and forth the kennel he paces, As he watches peoples faces,
Some have eyes that glaze right through, Others give a sigh; “poor old you”,
But none of them see the dog beneath, The heart of gold that is underneath,
This old boy is no longer a pup, So it was time to give him up.

He used to bark when he seen you, Between the bars his tongue poked through,
On his rear legs he stood tall, Even though he was quite small, Happy and jolly he
loved to play, Sadly now he sees no light of day, Just a wall made of bricks,
Still it has to beat those kicks.

The days grow longer and he knows his fate, Though he longs to find a new best mate,
He knows what happens in the room, In his head this threat will loom, The clock still ticks
and the wind still blows, They day has come and that he knows,
Round his neck the lead hangs low, “Come on now boy time to go”.

Into the room he walk so shy, But through the windows he sees the sky,
The needle was ready and he was held tight, “Its okay little boy please don’t fight”,
“This is nothing to be scared of my dear”, For in his eye they could see the fear,
“Today is the day you leave us, you see”, “There is a better place for you to be” .

To his surprise he didn’t sleep, But there were tears from those who weep,
A family came to take him home, To a place where he will never be alone,
Children to play with and some toys, Even some rough play with the boys,
A bowl of food to munch all day, No rations for what they can afford to pay,

Some love is all he needed to be shown, Not out into the street like he was thrown,
A roof, a bed, a dish of food, Lightens up his saddened mood, He stands and
watches the children play, How this family made his day,
He was given a chance so many are not,
Something that will never be forgot.

"and so our rescue was born to help save the lives of these
beautiful, loving, loyal family pets"

Staffie Smiles Rescue helping death row dogs in pounds all over the UK.

​ "Please, Help us to be their voice" 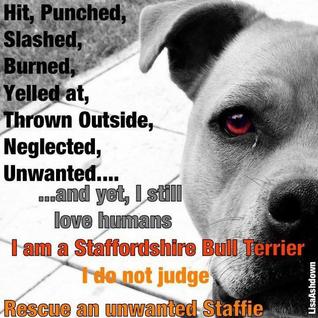 *Information taken from other web sources.